ADHD can be both a gift and a curse. Great for out of the box thinking, quick sense of humour, wanting to try new things. But there are oh so many down sides. 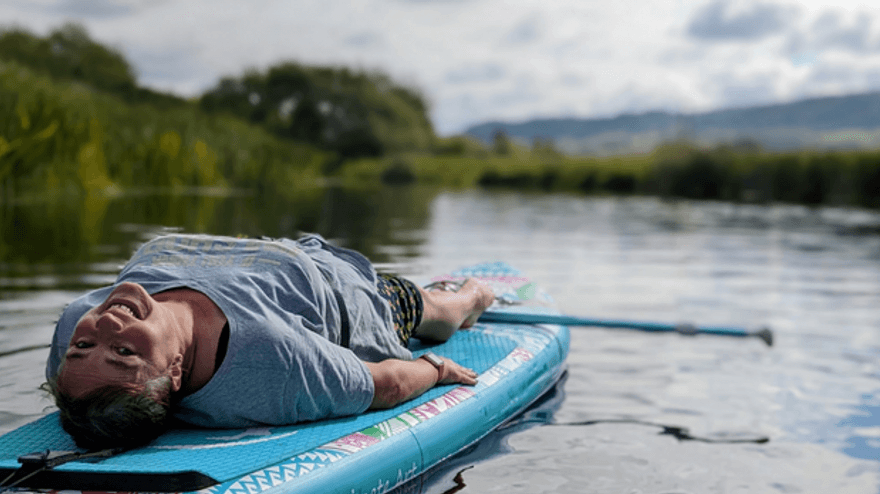 ADHD can be both a gift and a curse. Great for out of the box thinking, quick sense of humour, wanting to try new things. But there are oh so many down sides! Constantly misjudging time, saying things that pop into your head, then worrying about them for hours, days, weeks wondering if you have offended someone because we also tend to be a very sensitive bunch. The struggle to regulate your emotions is real and don’t even get me started on our brains. Since I was a child, I have described my brain as being like a fairground; the spinning, bright lights, fast movement, overwhelming smells and sounds. Not to mention that pretty much every ADHDer I have ever met can relate to the fact that our heads are like juke boxes that are never unplugged, the music doesn’t stop. Our brains must be exhausted from never stopping, never switching off.

The result of the busy brain is that the body tries to keep up. Trying to keep our minds happy we say yes to everything and everyone, constantly trying to people please, we over extend ourselves, doing too much too often but never being able to fully focus on any of it.

I have lived near a private water sports lake for years but had never been able to talk anyone into going. This summer I met up with a couple of girls who were just crazy enough to agree to go there kayaking with me. I had never done this before but fell in love with it instantly (to the point I booked back in once a week for the rest of the season). Just being on the water, sun glinting, trees rustling gently in the wind, I’d found a happy place. However, whilst on my first kayaking session I spotted people paddle boarding and liked the look of that too.

Two days later I ended up hiring my first Paddle board. The kayak just could not compete. I wasn’t brave enough to attempt standing up for most of the 1 hour session but realised even if I never stood, I could still really enjoy paddle boarding. I felt so much more connected to the lake than I had in the kayak. More at one with nature I began to feel a very unexpected calmness. In the kayak I felt the need to paddle around as fast as I could (which is pretty much the speed I live life at in general) but whilst on the paddle board I experienced just pausing, breathing, enjoying. 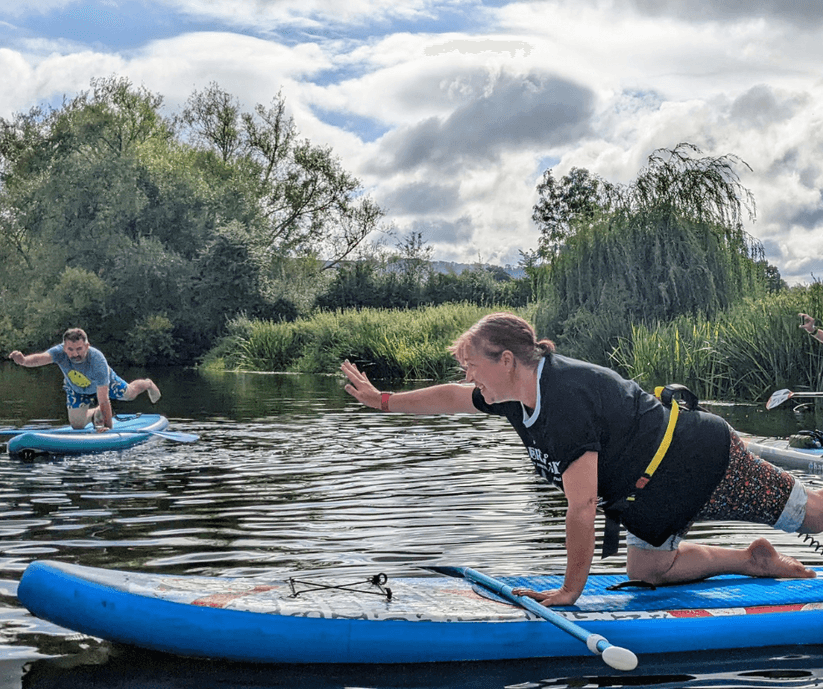 After my second session on the lake and several failed attempts to stand, mostly caused either by my shoes sticking on the board or by me bottling it. I decided to find somewhere that did actual lessons. A happy accident occurred later that week. Whilst driving home from an event I had attended, I took a wrong turn and got totally lost. This is not at all uncommon for me. Between ADHD and dyslexia even google maps doesn’t stand a chance. I have even managed to get lost using ‘these three words’ which is apparently impossible, yet I somehow achieved it. On this particular occasion I spotted a little farm shop whilst lost and thought it looked like a nice place to pop into. However as soon as I got out of the car I got totally distracted by a sign for a paddle boarding place. They were closed but I took down the name and called them the next day, booking in for my first Paddle board safari.

The safari was a group session suitable for all abilities including complete beginners. The part that made me nervous was that rather than being in a small lake, it was on the river Avon. I spoke to the couple who owned the company, explaining that my balance is shocking, and I didn’t plan on standing up during the 2 ½ hour session, I just wanted to enjoy it. They told me I would enjoy it but they would also get me standing. I really wasn’t convinced.

One by one the other members of the safari all stood up. Not me. I bottled it time after time. I would almost get up, but as always my ADHD brain would be spinning at 90 miles an hour, distracting me, telling me I couldn’t do it, telling me all the things that could go wrong, telling me I was a loser and not to even bother. When asked what I was really worried about I responded not being able to get back on the board if I fell off. I was assured the instructors could get me back on if I couldn’t manage it. Eventually after feeling sick, wanting to just give up and go home, and spouting a long list of profanities that would have embarrassed many a sailor, I was up! I cried and made one of the instructors cry too. It was a feeling I cannot explain, elation, success, freedom, pride. At school I was always the kid who never quite managed anything in PE. But here I was standing. Me, on my feet, actually stand up paddle boarding. I can’t think of any feeling that has ever even come close. 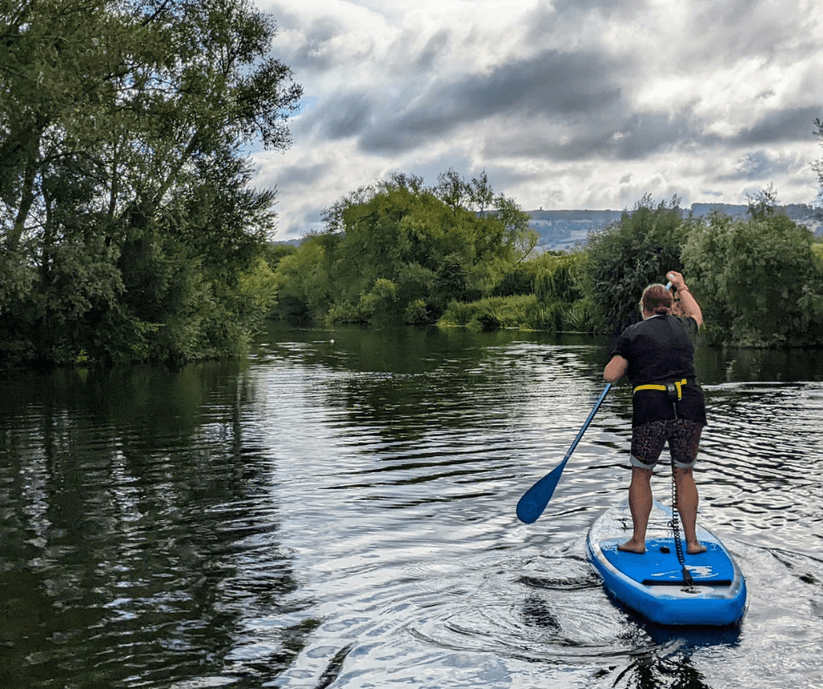 I started to go on regular safaris. I realised on my second safari that not only did they bring me a sense of achievement but also freedom and feeling of wellbeing like no other I have ever experienced. Over the years I have tried many activities that are supposed to calm the mind such as yoga which just bored me, I wanted to speed it up, breathing techniques which annoy me as my mind keeps spinning telling me all the things I need to get done and don’t even start me on meditation. I know it works brilliantly for a lot of people, but it just winds me up to the point I feel like I want to punch someone, pretty sure that’s not the desired outcome. But paddle boarding… wow.

For the first time that I can ever recall my mind was still. The spinning, flashing, whirring all stopped. I became totally focused on my breathing, posture, paddle technique. My ADHD brain relaxed and enjoyed the feel of the board gliding through the river, the sheep, birds, and dog walkers on the banks, navigating bends and passing boats.

I still have a tendency to speed paddle. My instructor has said “Slow down Suzi” so many times that I have thought maybe I need to get it embroidered on a t shirt or tattooed on my wrist as a reminder. But the good thing is that even when my paddling is fast, my brain is still in a slow, calm place. I even love the feeling of just stopping on the spot to practice my turns, sitting on the board with my legs dangled into the water or just lying flat on the board looking up at the sky. I have found a way to stop thinking of all the things I want to do with my life, anyone I may have upset in the past 10 years, the cleaning, gardening, shopping and DIY I needed to do. Paddleboarding allowed me to experience what many people take for granted, just being in the moment and relaxed. Finally, I have found my happy place. I have found tranquility. 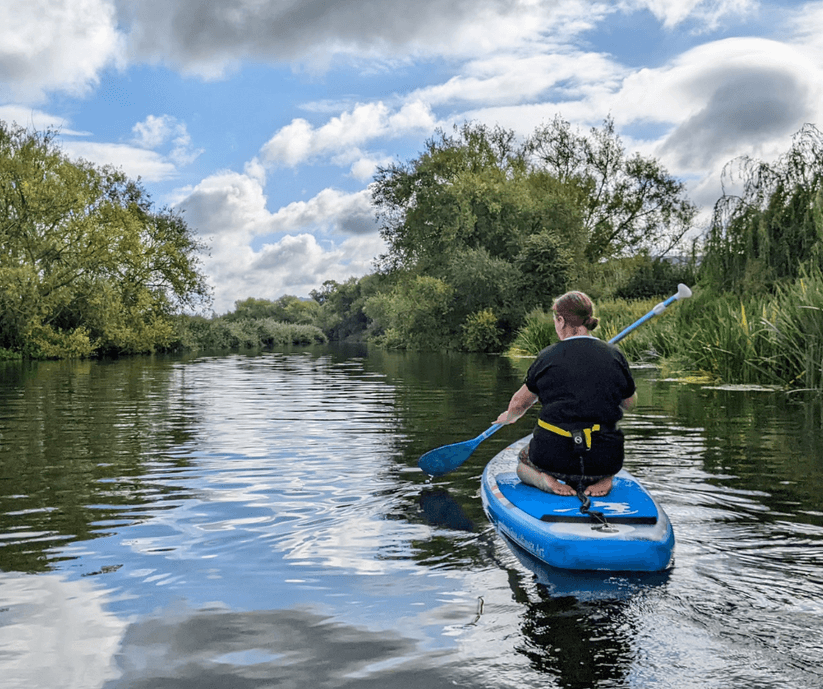 Laura Lou Crane - Being an inspiration to my younger self

In this episode of the Outside & Active Podcast, outdoor enthusiast, influencer and model, Laura Lou Crane talks through her love for the outdoors, her experience on Love Island and battles with eating disorders.

The Lake is the lightest non-inflatable kayak in the world and is Oru Kayak’s most affordable boat to date.