Seriously, how much could go wrong? Running a marathon is never easy, but the barriers in front of contributor, Jenny-Anne were almost enough to put her off the final step of running an inspiring marathon. 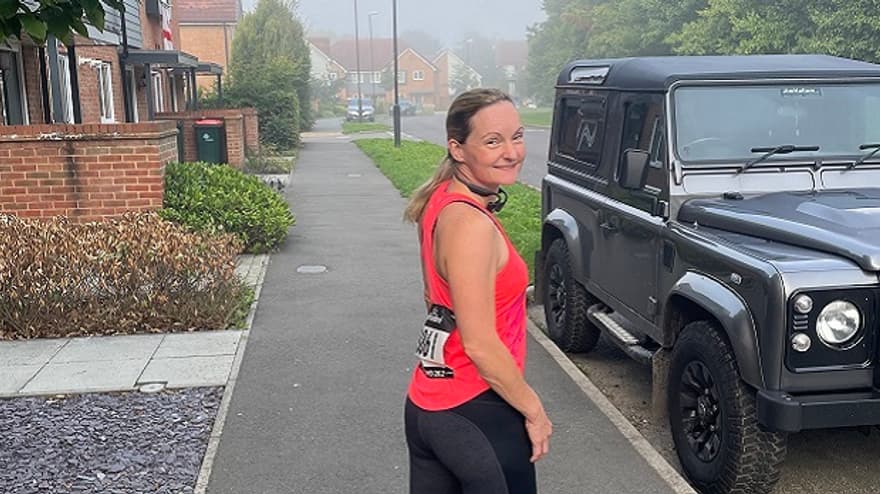 I started running very much against my will, after my boxing trainer suggested I do something to address my inability to keep up with the heavyweights on a group run. In fact, I couldn’t get around a single football field without stopping. That was seven years ago. But it was only after completing 200 parkruns, several half marathons and 750 miles in a single year that I was comfortable calling myself a runner at all.

But throughout those years of jogging and slogging, the 26.2 mile marathon distance remained a terrifying prospect. Twice a half. Five hours or more of running. That’s for proper runners.

Or… Wasn’t it true that I knew ordinary people twice my age or three times my weight that had run a marathon. I had grown up next door to a man that ran London Marathon every year until his mid-eighties. In fact, most people I know seem to have run at least one marathon. Time to get it done, methinks. No more procrastination. This is the year I’m going to run a marathon.

Getting in the training

I researched intensively, even considering overseas events before finally settling on Richmond Marathon. Nice and flat, plenty to see along the route and I could wear my headphones to drown out the doubts. Scheduled for early September it was an odd choice for a winter runner, but if anything went wrong, I needed time to find another race before the year was out.

I also needed a challenge to start me off so my run buddy and I booked a 20-miler for late March. I trained hard, I felt great and I was ready, but I fell ill the day before, and my buddy went for it alone. She smashed out an outstanding time and I spent the week on the couch, unable to even catch my breath. I was miserable. But I got over it and once I was back on my feet, the training started all over again. 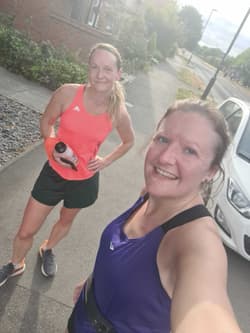 Then, twelve weeks out, just as the training was ramping up, Dad died. It wasn’t entirely unexpected but its impact was overwhelming. Over the last few years, his condition had progressively worsened, and I’d taken to bringing home every race medal specifically to show him. A sportsman throughout his life, he took pride in sharing my experiences. On New Year’s Day I’d promised to show him a marathon medal at last.

Naturally, training took a back seat for several weeks. It was difficult to run at all without welling up and (I have to be honest,) out came my old friends, the Marlboro Lights. Only a couple a day, but it wasn’t getting me into the peak physical shape I needed in just a couple of months’ time.

Sun’s out, flaking out

And then began the hottest summer of my life.

I’m recognisable year-round as ‘the one in the bra’. It’s never cold enough for me to contemplate more clothing than absolutely necessary for decency’s sake. I exude heat. All my races have taken place between October and April, when I’m at my peak (though mainly still in just my bra).

I struggle through early morning runs, when the temperature is often still above 20c. Long runs are hard to come by and I only manage two half marathon distances and a smattering of above 10k runs. I’ve never sweated near this much before, often for up to an hour afterward. I’m disgusting, but I’m doing it. 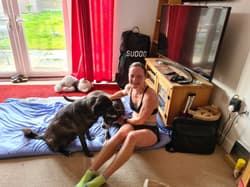 My run buddy has been struggling with an ankle niggle. It’s gotten worse and I discover, via Strava, that she isn’t going to run the marathon any more. She’d been consistently faster than me recently anyway, and I had feared I’d be running alone as she powered herself to a much faster time. But the cold reality of running alone mortifies me. The race is just three weeks away.

Only a week later, our event support buddy casually drops into conversation that she isn’t going to come any more either. Now I’m bereft. I was counting on her friendly face at the halfway stage, where she could replenish my electrolytes bottle and give me some experienced advice to keep me going until the painful end. This is getting too much.

She can, she WILL

At this stage I’m pressing ahead with angry belligerence. Sod all these disappointments. I’m doing it. I won’t do it as well as maybe I could’ve, but I’m bloody doing it. My new boyfriend has stepped up to support me. He joins me on one training run and, would you believe it, I have to dive into a bush and evacuate my bowels with very little notice. Never before IN MY LIFE has that happened. Surely there is no god.

Two days before race day and there is definitely no god. A remarkable seventy year reign is over and the country mourns the Queen’s passing. The race is off. The route straddles two royal parks, and access has been rescinded in favour of providing space for well-wishers to lay their tributes. This is the only race to be called off. What are the chances?

At this point, there isn’t even a marathon to run. So, am I doing it? Yes I am. I’ve done (some of) the training, I’ve told everyone I’m doing it (several times) and all my kit is expectantly laid out before me on the kitchen table. At this point, after all I’ve worked through, I’d run through gunfire to get me that (now non-existent) longed-for medal.

With less than 48 hours to go, there’s not a lot of time to arrange a new route, plan solo pacing, research potential toilet opportunities and get my mind focussed. 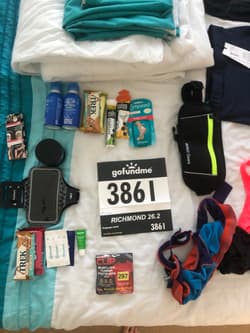 At 8am on Sunday 11 September as originally scheduled, I’m on the start line, aka my front door in Crawley. Thankfully the weather is overcast and likely to stay that way for at least the first two hours. My boyfriend is on his bike by my side and we’re headed up the A217 to Reigate – an invigorating blend of dual carriageways, business parks and concrete overpasses.

It all feels very surreal. This is not how it was supposed to be at all. But I’m doing it and I’m so, so proud of myself. The boyfriend is on hand with jelly babies, wipes, electrolytes and all the encouragement I need. He’s having to play the part of thousands of runners, marshals and spectators all in one. I’m so grateful I’m not alone, because I would’ve quit for sure. 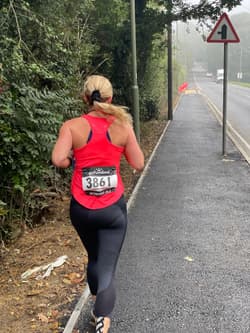 My revised route takes me through the centre of town and via Gatwick Airport, past congregations of tired travellers heading home to sleep off their own adventures. By 10am, lorries are flying past without respite and I’m reduced to running up and down tiny traffic islands as I wait for lights to change. Then the pavement disappears into the undergrowth, as do I for several miles.

On the return, I look forward to the final 10k, which is my normal friday morning loop. It’s a huge boost to see the familiar faces of the security guards stationed at their tiny cabins in the hotel car park, who always offer me a smile and a cheer. I make sure I jog past them and out of sight before I take a few minutes to walk off the extreme exhaustion I’m feeling. Then it’s on again, finally homeward bound.

The tears nearly kick in at mile 25, as I’m passing my local parkrun venue. I know exactly how far it is now and every step is heavier and heavier. At this point, the boyfriend needs to briefly abandon me to rescue a dog from a culvert. He’s everybody’s hero today ♡. He sprints back to me just in time to see me pass my doorstep and pause my Garmin. The distance was spot on.

Almost immediately I well up. I can barely breath. I’ve been fighting back the tears all along the way as I imagine how much it would have meant to be able to call Dad and share my odyssey tales with him. (Minus the bit about having to wee behind a bin at Gatwick South…) 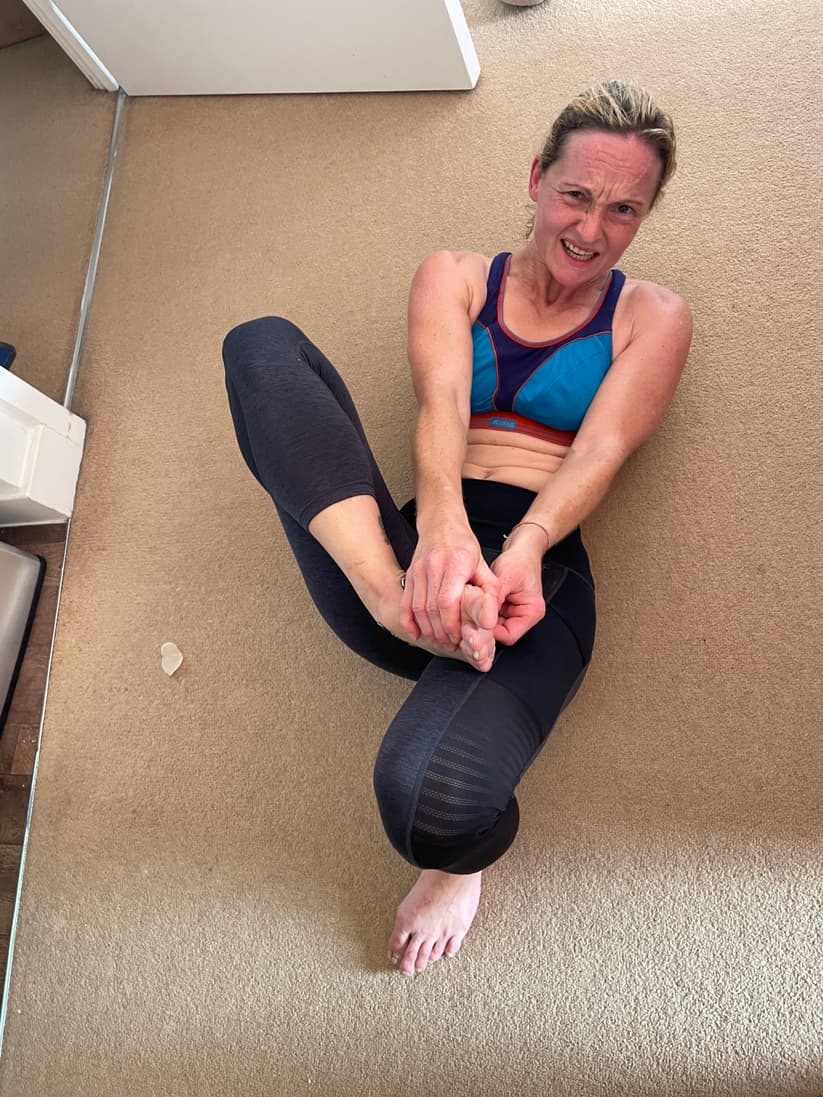 After writhing dramatically all over the living room carpet, crawling up the stairs on all fours and sitting in a cold shower until I could climb out unaided, I’m feeling good. I have just one blister and a slightly awkward gait, but otherwise it might be difficult to tell that I’d just run for four hours and fifty minutes. But I’ll be telling everyone I meet for the next few days, of course. I'm proper proud of this. I'm finally a proper runner. And a marathon runner at that, medal or no medal. 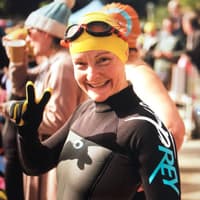 Jenny-Anne Dexter is a full-time life enthusiast, who likes to say yes to the abstract, the sublime and the ridiculous. A bog snorkeller, trail runner, year-round dipper and sometime cage fighter, she's open to suggestions as to her next challenge...

Most recent articles by Jenny-Anne Dexter

Get Out, Get Hygge

The true expression of hygge is joining with loved ones in a relaxed and intimate atmosphere. Take a little indoor snug for a quick breath of fresh air.

A Chill Out Adventure - The Adventure Travel Film Festival review

Have you ever heard about The Adventure Travel Film Festival? Luckily contibutor, Jenny-Anne, visited the festival this year and gives you the low-down on her thoughts and experience. If you love films and the great outdoors, this could be perfect for you!

A 24 hour swim event with just one 200-strong team