We had the pleasure of speaking with Sir Ranulph Fiennes for a behind the scenes interview at the National Snow Show where we talked about some of his accomplishments, the science behind his adventures and his new book, Shackleton.

Ranulph Fiennes is a British adventurer & novelist that is best known today for his various exploits around the world. He is especially hailed for being the first man to cross the Antarctica from one side to the other [via the pole] on foot. He holds several Guinness World Records & as an author, he released over a dozen fiction & non-fiction books, most notably biography of famous explorer Captain Robert Falcon Scott.

Fiennes was born on 7 March 1944 in Glasgow, Scotland, but he spent his youth in South Africa. After serving the Royal Army with Royal Scots Greys & Special Air Service, Fiennes began his life as an adventurer. He sailed across the White Nile in a hovercrafts (1969), explored Norway's Jostedalsbreen Glacier. His most ambitious adventure started in 1979, when he & his two friends Oliver Shepard & Charles Burton started the "Transglobe Expedition". They went from Greenwich England to the desert of Sahara, jungles of Mali & the Ivory Coast, & reached South Africa at Cape Town. From there they sailed to Antarctica & crossed it from one side to another visiting South Magnetic Pole. Next, they visited Australia, western shores of America, northern Canada & from there they successfully walked over Arctic visiting North Pole. On August 29 1982, they successfully returned to Greenwich completing their 100.000-mile long route across the globe.

In following years, Fiennes led an expedition that discovered the lost city of Ubar in Oman. Fiennes also tried two times to cross Antarctica & one time Arctic on foot without any aid. He failed on all three attempts & managed to be evacuated to safety. On May 2009, Fiennes successfully climbed on the summit of Mount Everest becoming the oldest British person to achieve that goal. 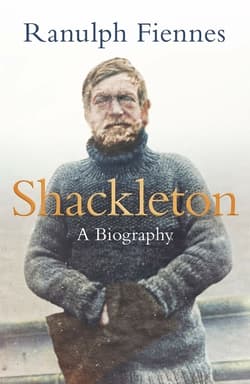 To write about Hell, it helps if you have been there.

In 1915, Sir Ernest Shackleton's attempt to traverse the Antarctic was cut short when his ship, Endurance, became trapped in ice.

The disaster left Shackleton and his men alone at the frozen South Pole, fighting for their lives.

Their survival and escape is the most famous adventure in history.

Shackleton is an engaging new account of the adventurer, his life and his incredible leadership under the most extreme of circumstances.

Written by polar adventurer Sir Ranulph Fiennes, who followed in Shackleton's footsteps, he brings his own unique insights to bear on these infamous expeditions. Shackleton is both re-appraisal and a valediction, separating the man from the myth he has become.