How to have fun on a half marathon

Sometimes the pressure of performing at a major event, whether that's a half marathon, parkrun or spartan race, it can feel pretty overwhelming with the pressure of hitting your times or achieving your personal best. On National Mental Health day, myself and pals decided to forget our times and just have some fun at the Brighton Half Marathon and encourage others along the way. 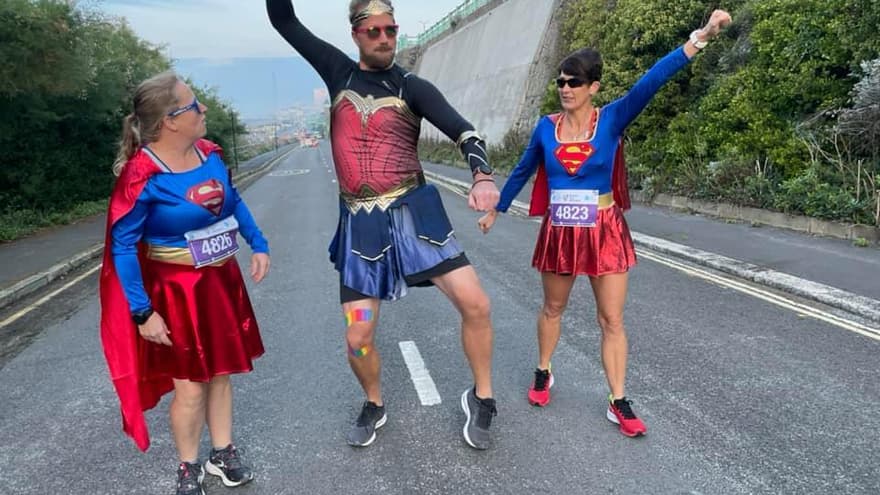 This was my first official half marathon since all of the covid shenanigans began and in fact, it was also the last one I ran before we first locked down back in 2019, so it was a great one to return to.

We were back on the start line of Brighton Half Marathon although this year, we started at the back. Not just mixed up in the back of our normal coloured starting pens, nope, we were literally the last people to cross the start line and it felt weirdly amazing.

See, some of my pals had just completed the London Marathon the week before and well, the rest of us just wanted to have some fun. What better way to get into fun mode than by a bit if fancy dress right?

So Wonder Woman, Super Woman, Princess Anna and the token cheerleader all gathered at the start line, for the Brighton Half. It was definitely a little, umm, airy in the first cool breeze of dawn, but we quickly warmed up as headed off on the course.

Our only agenda today, was to have some fun. No time chasing, no PB’s, just having a bit of a laugh as pals running through Brighton.

Crossing the start line, it wasn’t long before we saw some of our friendly pals running along, one of which enjoyed (or is that endured?!) a rather loud rendition of Happy Birthday, which when we double backed on the course later, I’m fairly sure we got the whole street singing Happy Birthday for Erica 😂

It was so great to be back amongst it on a major event, lots of people all out to enjoy themselves or push for their own PB’s - Brighton Half never disappoints.

We had such a great time chatting to various people as we ran around, finding out what they were fundraising for or who they were running for. But also our superhero team were helping to give people that little push to keep going. You could see people put an extra lift in their step when we ran past as the crowd cheered... and we had a water fight… sorry aid station volunteers if they got caught in the melee, but we may or may not have cooled each other down from the warm October skies! All in the name of a bit of fun.

Onwards we ran, picking up or slowing down the pace depending on how the group was feeling, then suddenly, we had just over a Parkrun in distance to go. But first… we dance.

A samba band was going for it, banging the drums as we decided to stop and have a little play, whilst cheering for everyone to run it home in their last few kilometres.

With 2k to go, Brighton seafront was coming alive with cheering as we neared the end. You could hear the ripple of shouts and applause building as we got closer… we shouted for “Liz” to keep going for her last part of her run (we’d been with her for the last few kilometres) and we suddenly found ourselves a few hundred metres out.

We started at the back together and we finished somewhere in the middle, but most importantly… together.

I had probably the most fun I’ve ever had running a half marathon. We let go of the idea that time mattered. We dressed up, we had fun, we cheered others around the course, we air high fived everyone we could on route…

Time doesn’t always matter. For us, it was definitely the taking part that counted.

Thanks to Petter, Tony, Nikki, Gemma and Debbie for joining me on the funbus at Brighton Half Marathon.