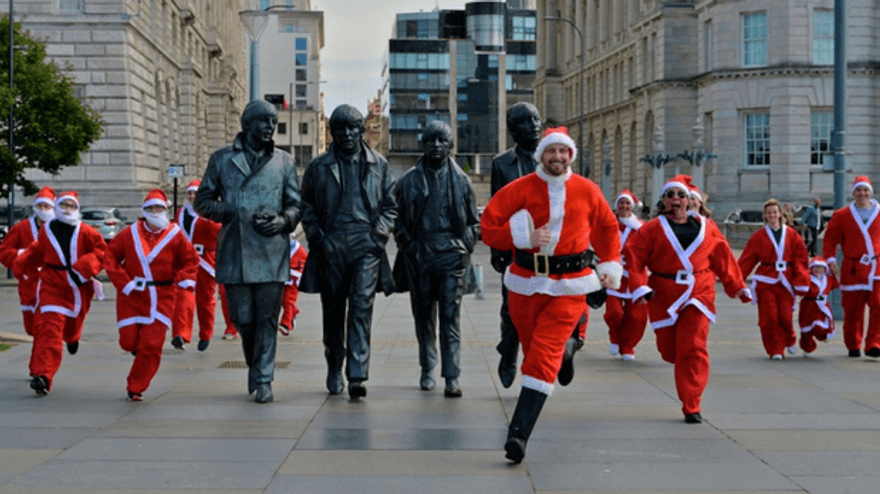 The countdown is on to the 19th annual BTR Liverpool Santa Dash which takes place in five weeks’ time on Sunday 4 December 2022. The event was created by independent race event organisation BTR Liverpool, who organise and stage the 5K festive fun run each year. The latest announcement from BTR Liverpool highlights free Arriva bus travel on event day, and next week’s opening of the city centre pop-up shop in St Johns Shopping Centre for in-person registration and Santa suit collection.

Highly regarded as the city’s kick-start to Christmas, Liverpool will be transformed into a sea of Santas when thousands pull on their red and blue festive attire for the annual spectacular. This year’s Liverpool Santa Dash was launched recently in glorious sunshine aboard the iconic Mersey Ferry – much to the amusement of passengers who were greeted by a group of excited Santas.

Thrilled with the colourful festive sight, they joined in the fun by posing for selfies with Santas, along with the spontaneous singing of Christmas songs. The BTR Liverpool Santa Dash 2022 is sponsored by Park Christmas Savings, part of Liverpool-based Appreciate Group. Alder Hey Children’s Charity returns as the official event charity, with fundraising Santas supporting its ongoing Surgical Neonatal Appeal. In Demand Radio is supporting the event as official media partner. All three organisations are returning for a second consecutive year. Now with just five weeks to go, BTR Liverpool is delighted to announce that Arriva North West is once again offering free bus travel on event day.

Arriva North West is supporting the Liverpool Santa Dash for the fifth time by offering participants free travel on the Arriva bus network across Merseyside throughout event day. To claim complimentary bus travel to or from the city centre, Santas must be wearing their Santa suit and race number on the morning, or their Santa suit and finishers’ medal when travelling home. There is no cut off time post run.

Lisa Pearson, Arriva Head Of Marketing, commented: “The Santa Dash is a great event that really unites the people of Liverpool for a day of festive fun while raising much-needed funds for charity. “It’s a pleasure to once again be involved by offering free travel to all those taking part. We’re looking forward to seeing lots of red and blue Santas on-board our buses and throughout the city on the day.”

Liverpool Santa Dash was created by BTR Liverpool Race Director Alan Rothwell. It was first staged in 2004 – and next year marks its milestone 20th staging. It has continued each year, including a virtual format in 2020 during the Covid-19 pandemic when mass participation events were not permitted. The 1K Mini Dash for youngsters aged 12 and under was introduced in 2007, while blue Santa suits were launched in 2010.

Last year, a sea of 5,000 red, blue and mini Santas took to the streets of Liverpool for the UK’s biggest festive 5K fun run. BTR Liverpool is the leading independent organisation for creating, managing, and delivering headline running events across Liverpool City Region. Its extensive portfolio covers various distances across different terrains, all with an ongoing commitment to sustainability. The BTR event portfolio also includes the Tour Of Merseyside, Liverpool Skyline Half Marathon, Mersey Tunnel 10K, Port Sunlight Road Race 5K and 10K, and Run For The 97.

BTR Liverpool Race Director Alan Rothwell explained: “We plan for the BTR Liverpool Santa Dash all year round. The weeks are flying by and now we are just five weeks until this festive spectacular returns for 2022. We’re thrilled to once again welcome Arriva North West into the Santa Dash family with their very generous support of free bus travel for Santas throughout event day.

“We’re working closely with headline sponsor Park Christmas Savings, event charity Alder Hey Children’s Charity, and media partner In Demand Radio – who are all on-board for a second year – to ensure a fantastic day filled with fun, laughter, and big smiles. It is a very special day, come and experience it for yourself.”

The BTR Liverpool Santa Dash is an accessible event open to everyone, from those running purely for fun to groups of fundraisers. Each year Santas walk, jog, or run alongside wheelchair participants, families, groups of friends or colleagues – even tiny Santas in prams and even four-legged furry Santas. The event acts as a platform for community groups, businesses, and charities to fundraise independently while taking part.

This year’s event starts at 9.30am from Pier Head Liverpool. The 5K route takes Santas along The Strand and into Grade I Listed Royal Albert Dock Liverpool, through the city centre, before heading to the grandstand finish line at Liverpool Town Hall – complete with ‘real’ snow and festive characters. The Mini Dash is for youngsters aged 12 and under. It starts at approximately 11am in Castle Street, once all Santas in the main Dash have completed the course. The youngsters follow a similar city centre route before crossing the finish line outside Liverpool Town Hall. 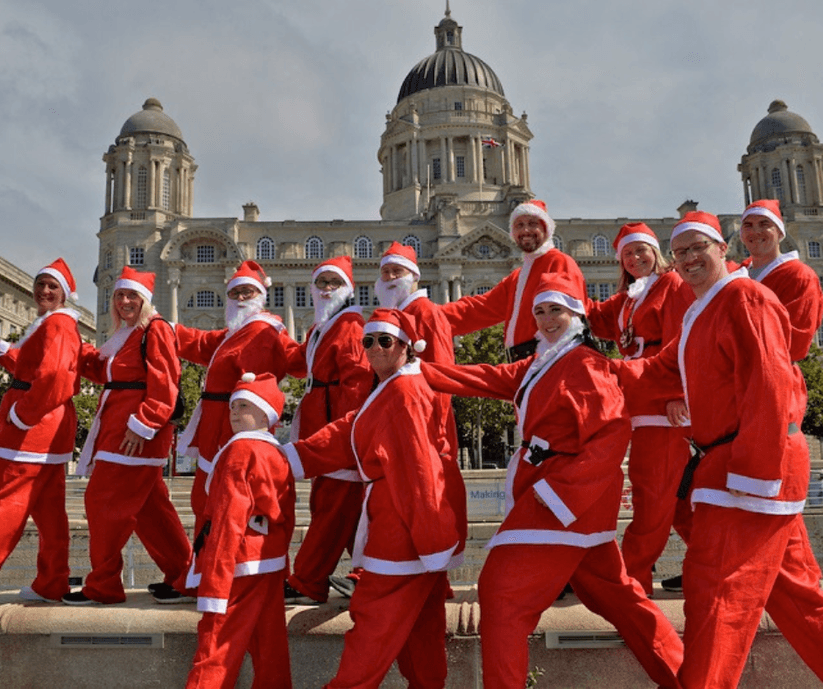 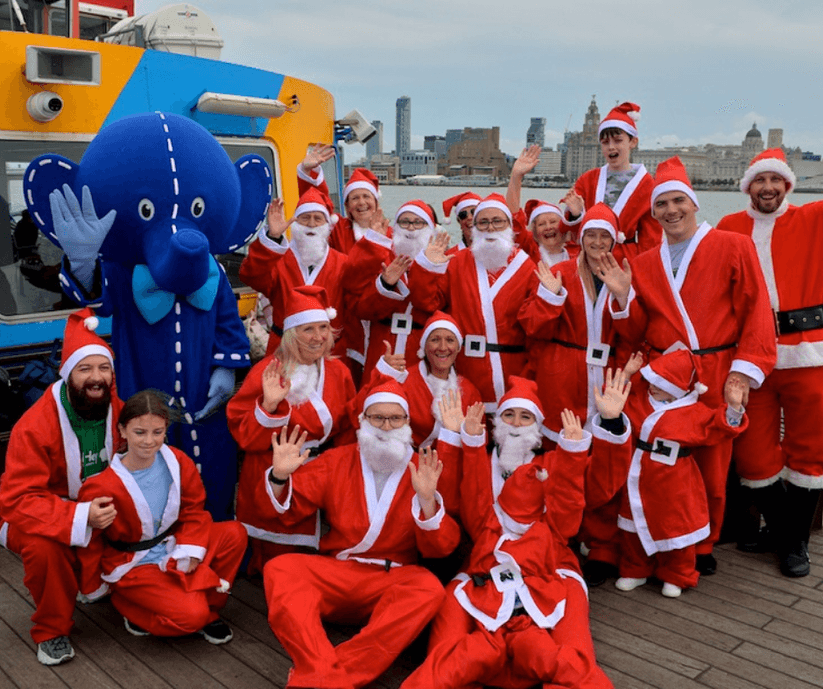