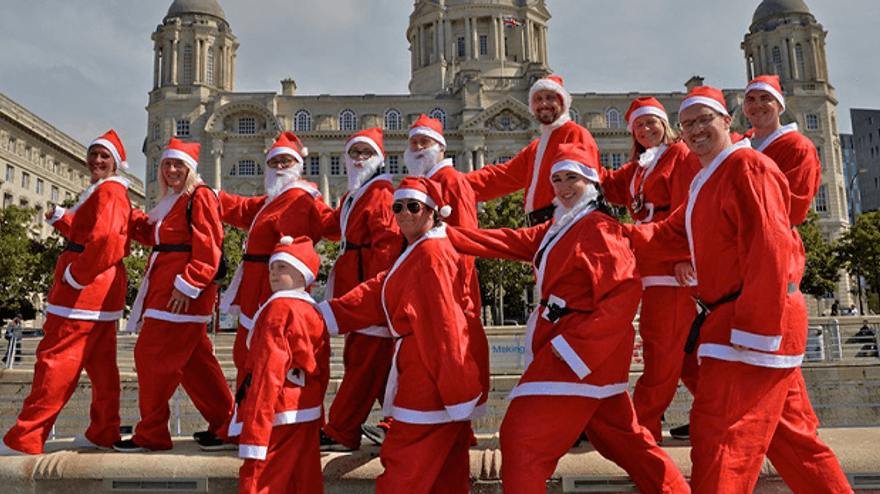 More than 5,000 Santas have already signed up to pull on their festive attire and be part of the UK’s biggest festive 5K fun run.

There are only days left to register at the Santa Dash pop-up shop in St Johns Shopping Centre, Liverpool city centre. The shop is open 9.30am to 5pm on Friday and Saturday for final entries and Santa suit collection. No entries will be taken on event day. Online registration has now closed.

Eight-month-old special guest Frankie and his family from Wirral have been given the honour of starting the Santa Dash, representing official event charity Alder Hey Children’s Charity.

Frankie is a patient at Alder Hey and is also part of this year’s Alder Hey Christmas pyjama campaign. He will be joined at the Santa Dash by his Mum Jess and lots of his family to support the Santas as they set off.

The very first winner of TV reality show Big Brother, Liverpool’s very own Craig Phillips, will be back on the start line to take part alongside wife Laura.

Miss England Jessica Gagen and Miss Liverpool City Region Georgia Austin are also joining in the Santa Dash fun. They will be cheering on Santas in their official sashes and tiaras – before pulling on their running shoes and taking part in the festive 5K fun run.

The Santa Dash will be hosted by Graeme White and In Demand Radio presenters Lee Butler and Josef Hollywood.

Alder Hey Children’s Charity is raising funds towards the specialist hospital’s new £3million Surgical Neonatal Appeal to help develop a state-of-the-art unit for newborn babies and their families. The unique unit will be the first of its kind in the UK.

The unit is a joint project between Alder Hey and Liverpool Women’s NHS Foundation Trust as the Liverpool Neonatal Partnership. It will offer 22 neonatal cots, including 18 individual family rooms where parents can remain alongside their poorly newborn 24 hours a day, whilst their baby receives expert care.

Fundraising Santas have already raised £6,500 through this year’s event – donate at https://www.justgiving.com/campaign/santadashah2022

Alder Hey is still inviting runners to run on their behalf, visit https://www.alderheycharity.org/events/latest/liverpool-santa-dash/

Frankie was born in March 2022 at Wirral’s Arrowe Park Hospital. Prior to birth he was diagnosed with gastroschisis and would need an operation within hours of birth. Gastroschisis is a rare condition affecting only one in 3,000 babies, and means the bowels are on the outside of the baby’s stomach. The operation could only be done in a specialised children’s hospital with full paediatric surgery facilities – so Frankie had to be separated from Mum Jess and was transferred to Alder Hey.

Jess received a call at midnight saying the operations had gone well, and they were reunited the next day. Frankie continues to recover and has exceeded all expectations. 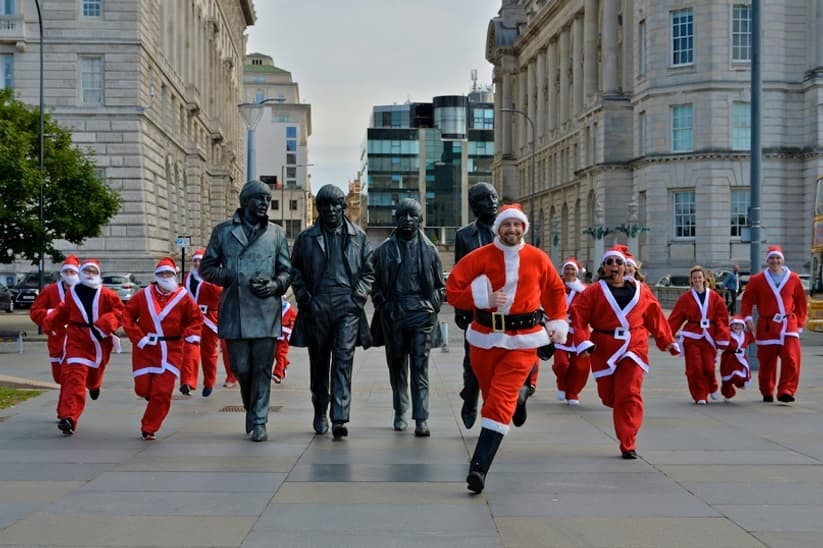 Frankie’s Mum Jess explained: “I couldn’t be more grateful for every single staff member at Alder Hey. And we’re thrilled to be part of this year’s BTR Liverpool Santa Dash, a chance to cheer on the Santas while raising the profile of the new appeal as it would make a huge difference to so many people.

“It’s amazing to see how far Frankie has come. We have had a few setbacks, but we always keep a positive mind. The new unit would have definitely benefitted us, going to different hospitals can be quite confusing and finding your way around can be stressful. If there was one place you could go for all of it, that would be amazing and make you feel more comfortable as a family.

“The whole family being able to stay over would be nice, as it can give you the same feeling as being able to take your baby home after birth.”

The team from Alder Hey Children’s Charity will also be joined by four-year-old fundraiser Riley from Wirral, Mum Hannah, and Dad Conor – who were part of this year’s Santa Dash launch aboard the Mersey Ferries in the Summer. Riley recently cycled five miles raising £400.

Alder Hey Children’s Charity, Park Christmas Savings, and In Demand Radio have all returned as event partners for a second consecutive year.

Liverpool Santa Dash was created by BTR Liverpool Race Director Alan Rothwell and was first staged in 2004. The 1K Mini Dash for youngsters aged 12 and under was added in 2007, blue Santa suits were introduced in 2010. The event has continued each year including a virtual format in 2020 during the Covid-19 pandemic when mass participation events were not permitted.

Highly regarded as the city’s kick-start to Christmas, the festive spectacular celebrates its milestone 20th staging in 2023 – making it one of the longest established highlights in the city event calendar.

Support also comes from Arriva North West for a fifth time by inviting Santas to travel by bus into the city centre for free from across Merseyside on event day – as well as a free ride home afterwards. Participants must be wearing their Santa attire and run number on the morning, and be displaying their medal afterwards. There is no cut off time post run.

The BTR Liverpool Santa Dash sponsored by Park Christmas Savings is an accessible event open to everyone, from those running purely for fun to groups of fundraisers.

Each year Santas walk, jog, or run alongside wheelchair participants, families, groups of friends or colleagues – even tiny Santas in prams and even four-legged furry Santas.

The event acts as a platform for community groups, businesses, and charities to fundraise independently while taking part.

The BTR Liverpool Santa Dash starts at 9.30am from Pier Head Liverpool on Sunday 4 December. The 5K route takes in The Strand, Grade I Listed Royal Albert Dock Liverpool, and part of the city centre.

Katumba Drumming Band will spur on Santas to the grandstand finish line at Liverpool Town Hall – where they will be greeted by festive characters and ‘real’ snow.

The Mini Dash is for youngsters aged 12 and under. It starts at approximately 11am in Castle Street, once all Santas in the main Dash have completed the course. The youngsters follow a similar city centre route before crossing the finish line outside Liverpool Town Hall. 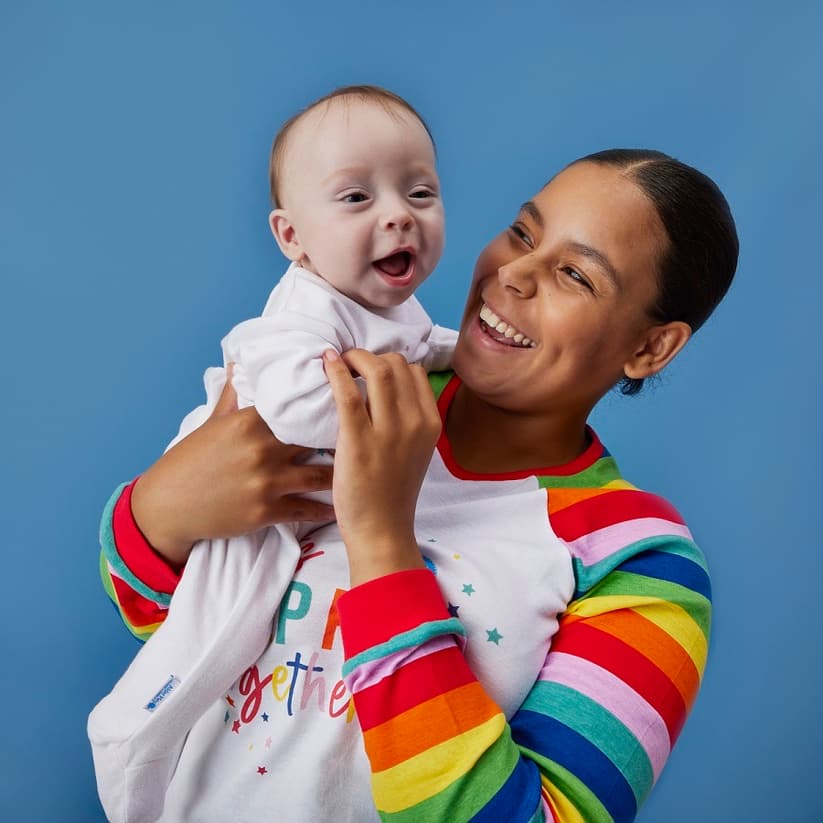