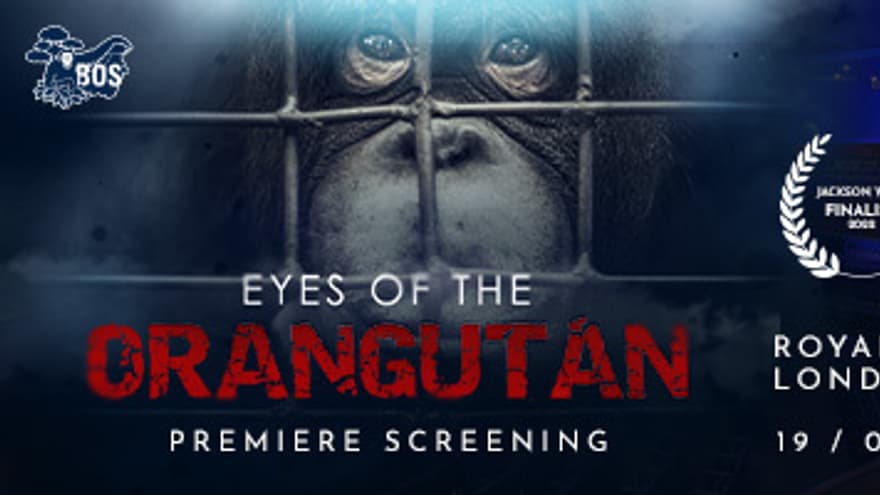 Eyes of the Orangutan

From the studio that brought you ‘Ivory Game’ and ‘Sea of Shadows’ comes a new and powerful documentary, ‘Eyes of the Orangutan’. A captivating exploration of one of the most troubling facets of modern wildlife tourism, and an uplifting celebration of one of our closest living relatives: the orangutan. Wildlife tourism has become a lucrative business and is now worth around 250 billion dollars a year. These profits come at a cost – and it is the animals who pay the ultimate price. Meet Aaron Gekoski - Eyes of the Orangutan lead presenter and award-winning environmental photojournalist. Together with director Chris Scarffe and cinematographer Will Foster-Grundy, Gekoski embarked on a four-year investigation of the orangutan tourism industry.

Take a look at the trailer

All proceeds from the event will go directly towards Borneo Orangutan Survival UK to support orangutan conservation in Borneo.

Every year, millions of people travel the world to get their fix of the cute, the cuddly, and the charismatic. We take our families to zoos, ride on the back of elephants, visit dolphin shows at aquariums, and watch animals perform tricks at circuses.

Wildlife Tourism is a global, multi-billion dollar industry. But these profits don’t come without costs. In front of our eyes, and behind closed doors, lie stories of abuse and cruelty.

Aaron Gekoski is an internationally acclaimed photojournalist who has spent more than a decade documenting human-animal conflict. Over recent years he’s turned his lens on the Wildlife Tourism industry; a mission that’s taken him to dozens of countries.

But it was a trip to Vietnam that changed everything. At an amusement park in Ho Chi Minh, he spent time with a large male orangutan. Kept in a 4x5m enclosure, the orangutan had little more than two boulders for stimulation, no trees to climb, no place to escape the glare of visitors.

Orangutans are star attractions at Wildlife Tourism attractions. Sharing 97% of our DNA, they are sentient and intelligent animals. When kept in captivity, at places that cannot cater to their complex physical and emotional needs, they often suffer from stress and depression. The scene stayed with Gekoski: If we can do this to one of our closest living relatives, what hope is there for any other animal?

After Vietnam, Gekoski brings is his colleagues and friends – director Chris Scarffe, cinematographer Will Foster-Grundy and editor Damian Antochewicz – and a four-year investigation into the orangutan tourism industry begins.

In Thailand, they see orangutans forced into grotesque boxing shows, and others kept in dirty cages at the top of a shopping mall. And in Indonesia, they document orangutans on display at lavish breakfast buffets, and crowded by groups of tourists at National Parks.

Shocking revelations from poachers reveal how the orangutans ended up at these attractions. Stolen from their natural habitats – their mothers killed in the process – they are then smuggled across international borders. Once at their final destination, they are then trained to perform using cruel techniques or locked in cages for the rest of their lives.

On their journey, the team witnesses untold pain and suffering. Thankfully, there are groups working to mitigate this crisis. At Borneo Orangutan Survival Foundation, they meet local heroes who rescue and rehabilitate rescued orangutans, ready for release back into the wild.

Secure your tickets for January