Excited after a busy weekend listening to the speakers and meeting the brands, contributor Zeph shares how the National Running Show went for her. 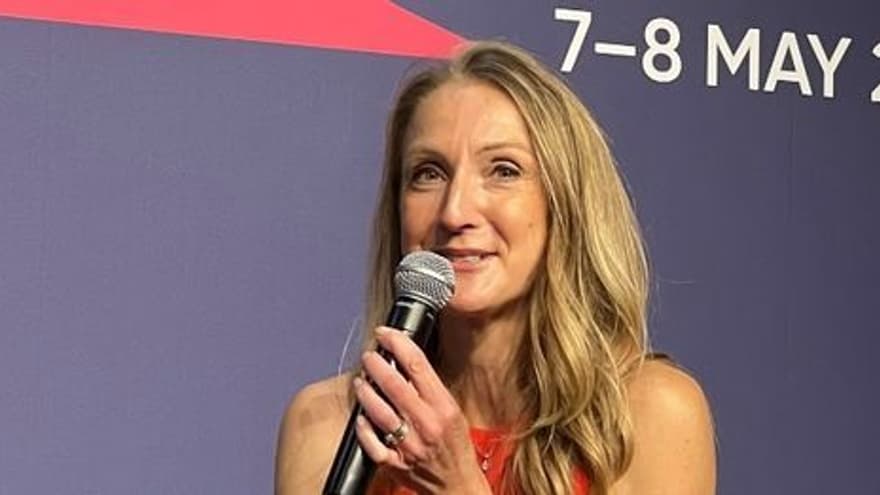 We caught up with contributor Zeph, to find out what they thought of the show.

The National Running Show South, which was held on the weekend of the 7th & 8th May was the first south show I had been to since it started last year. We arrived a little later than intended due to a concert in London the night before so we made our way to the VIP tent to have a much needed cup of coffee and meet up with a virtual friend who I made on the Indoor Relay during the very first COVID lockdown - who was my first guest as Team Captain on the running relay we did through lockdown.

As we arrived we saw the lovely Esther Newman and Holly Taylor from The Women's Running Podcast who ended up sitting with us to have a little chat and enjoy a coffee! How cool is that?! We're big fans of the podcast and were so delighted to be able to tell them in person. I also got to tell Holly she did an article in Women's Running about the Indoor Relay which I was lucky enough to feature in.

It was an absolute treat to be able to start our day and the first day of National Running Show South sitting with the two most charming, lovely and super funny ladies! Thank you Esther and Holly, you made our day! 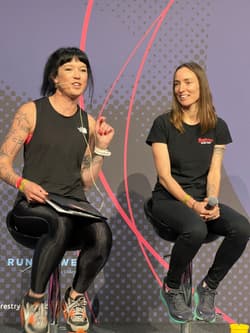 After catching up with a few of the Run Show regulars such as the gorgeous Nikki Love we headed to The Running Skills Theatre for the talk 'Strength on the Trails ' with Esther and Holly from the Women's Running Podcast and their guests Sabrina Pace-Humphrey's and Emma Kirk-Odunubi. Not only was it informative, but as expected, downright funny! If you haven't listened to The Women's Running Podcast yet, I highly recommend you give it a whirl but be warned, if listening whilst out on a run, there may be times when you burst out laughing mid run! (click the highlighted link above to listen)

As we got there so late, the afternoon seemed to fly by so we only got to see one other talk which was Mo Farrah from afar as the crowds were just insane for his talk and visited a handful of stalls, one main one being the Absolute 360 stand which I'd promised Umberto we would. Umberto and I have followed each other for a couple of years now, but never actually met, so it was lovely to finally meet in person at the event, have a chat and buy a few bits of his amazing infrared tech clothing which will come in very handy during our runs and when using them after for recovery. 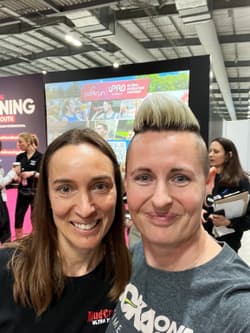 We arrived nice and early ready for the Sunday photo with Paula Radcliffe then we headed straight for the Inspiration Stage where we sat from 9:15am to about 1:30pm as it was jam packed full of speakers we really wanted to see for most of the day. The morning kicked off with hosts Danny Bent (read about his latest challenge here) and Jo Pavey interviewing Paula who was lovely and delightful as always. I've been lucky to see and meet Paula a couple of times, one being at the Birmingham show a few years ago and she never ceases to be an absolute inspiration who is always generous with her time. On this occasion we were treated to a Radcliffe double whammy when she can back to be interviewed, along with Jo Pavey live on stage for the RunPod Podcast hosted by Jenni Falconer - the very first live RunPod which I find weird to listen to now, as it was being recorded in front of me!

Although Paula, Jo and Jenni were absolutely fab, there were 2 ladies and one man I was really excited to see on the Inspiration Stage on day 2 - Laura Swanton Rouvelin, Vic Owens and Rob Pope.

Laura and I have been social media friends since 2019 where we got talking about the brand HOKA. I was a fan and she'd just been featured as a Human of HOKA, so we shared this common interest. Whilst I'm very much a recreational and somewhat novice runner, Laura is an incredible ultra runner and a big reason I started following her; she's such an inspiration being a Mum of 3, full time radiographer, somehow fits in all her training then places in the top 5 in most races she takes on! Like I said, INCREDIBLE! It was an absolute treat to finally meet Laura in person and get to see her take centre stage to share her current ultra running journey. 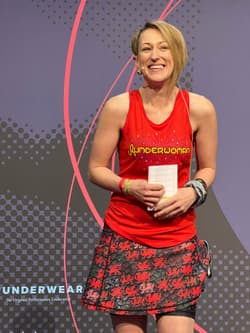 Following Laura was the delightful Vic Owens (listen to the Outside & Active Podcast with Vic here). Vic and I became friends on the Indoor Relay back in 2020 and I've been lucky enough to be featured as one of her We Run Bright models, the super bright and fun running clothing company she recently started with her mate Gavin and you would have seen (and hopefully bought from) at the Run Show. Vic kindly asked me to be her mic runner for her talk and although she was super nervous, once she took to the stage, she absolutely flourished!! Vic's topic was her recent ultra Lon Las Cymru and boy oh boy did she wow the crowd!! I won't spoil the details, but you can watch the documentary called RUNNING AGAINST ALL ODDS - Gordon Hughes & The Happy Runner Attempt the Lon Las Cymru Ultra Marathon to see how epic this ultra marathon finish was! I don't think there was a dry eye in the house, including mine!

To end what was such an enjoyable Run Show South was Mr Rob Pope, aka The Real Life Forrest Gump who I'm also lucky to call a friend and to whom I have the Run Show to thank for that. It was nice to see him back on the stage to reveal another epic challenge and one which is quite unique... but I'll let him tell you all about it on his socials.

Highlight Extra: On our way out we managed to bump into Suzi Shaw who is always so lovely to chat to and was kind enough to take a few photos with us. You're a star Suzi and I look forward to seeing you at the next Run Show.

Once again, an absolutely fun filled and really enjoyable Run Show weekend thanks to the superstar team at Raccoon Events. For me, the biggest highlight was starting my day with greeting so many friends whom I've met and bonded with all thanks to The National Running Show. It's a wonderful event to be a part of and always a fun weekend away so if you haven't been to a show yet, Run Show Birmingham 2023 is just around the corner.